I have just spent a week in Cumbria with hubbie and little son. The holiday house was a 17th century farmhouse in Grasmere with wonderful views from every window and the sounds of rushing water from the stream and birdsong in the garden. 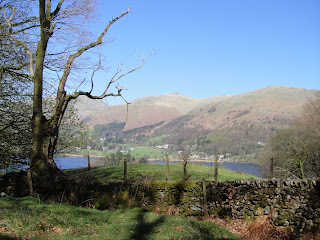 Hubbie has a special birthday coming up and requested an early birthday present of a hand held GPS unit. I saw a great postcard in the local newsagents with two women grumbling about a man holding one of these. It was titled Gadget Pratt Syndrome. Hubbie was not amused.

I suppose I should be grateful that it rained at the beginning of the week, because I was exhausted after several route marches across the fells. Strange that I seem to be able to walk miles on the flat or at low level, but as soon as you put steep ups or downs into the mix I slow down.

After Wednesdays 7.9 miles hike, up a fell so high Windermere looked like a map below, I went on strike. Hubbie and son went off to tackle Green Gable and I spent a day by myself.

I did a #1k1hr challenge on Twitter with @katylittlelady (her blog can be found here) and managed to write 1552 words in the hour. See Julia Broadbooks' blog here  for details of the challenge. I shall definitely be doing this again, as it was a focussed way of getting words written. No surprise to find my story was about a girl who had been route marched around the fells by her ex and was now taking things at a more gentle pace.

I then had a quiet amble through Grasmere and sat at a pavement table to drink latte, eat a toasted teacake and finish my story– bliss. The boys had a good day too without me trailing behind and there was a nice meal on the table when they got in. Maybe I should go on strike more often, as I felt so relaxed.

Have you tried the Twitter writing challenge #1k1hr?
Posted by Morton S Gray at Monday, April 11, 2011